(Cross-posted from the Mozilla blog)

Today at the Mozilla Festival, we’re extremely proud to launch the 1.0 version of Popcorn Maker, a free web app that makes video pop with interactivity, context and the magic of the web.

The result is a new way to tell stories on the web, with videos that are rich with context, full of links, and unique each time you watch them. 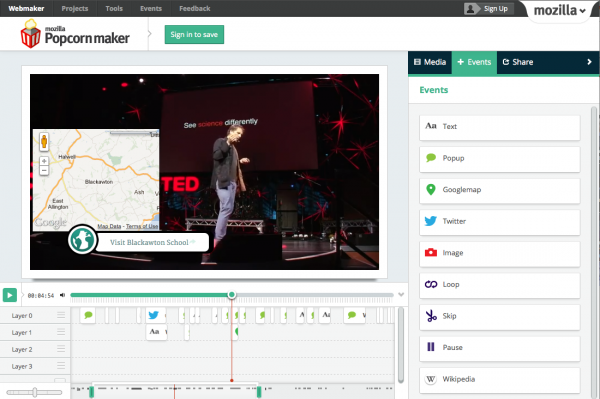 “Until now, video on the web has been stuck inside a little black box,” says Mozilla’s Director of Popcorn, Brett Gaylor. “Popcorn Maker changes that, making video work like the rest of the web: hackable, linkable, remixable, and connected to the world around it.”

Last year Mozilla launched Popcorn.js, a Javascript library for developers that resulted in ground-breaking productions like the NFB’s One Millionth Tower, PBS and NPR’s 2012 election coverage, and more.

“But until now, the power of Popcorn has been available mostly just to developers,” Brett says. “Popcorn Maker puts that power in everyone’s hands, through an intuitive interface anyone can use. We’re really excited to see what the world will make with it.”

Developed as part of Mozilla’s Webmaker program, Popcorn Maker is a unique collaboration with filmmakers, developers, young media makers, and the Centre for Development of Open Technology at Seneca College, all working to design and build together.

Popcorn Maker is built entirely using open web elements, written in HTML, CSS and Javascript. “It’s essentially a web page that makes other web pages. We think it’s a great example of Mozilla’s larger vision for what web apps can be,” Brett says.