(cross-posted from the Mozilla blog)

Today, Mozilla and PBS Newshour are proud to launch AdLibs, a unique new media mash-up tool centered on the 2012 U.S. election — featuring you in the starring role.

Make your own satirical “attack ad”

AdLibs makes it easy for anyone to make their own political campaign ads about themselves — from tongue-in-cheek attack ads to folksy biographical narratives.

The app is able to pull photos and quotes directly from your Facebook profile, then package them into the ad template of your choice. You can then share the finished commercial with friends, family and voting public. Try it out now. 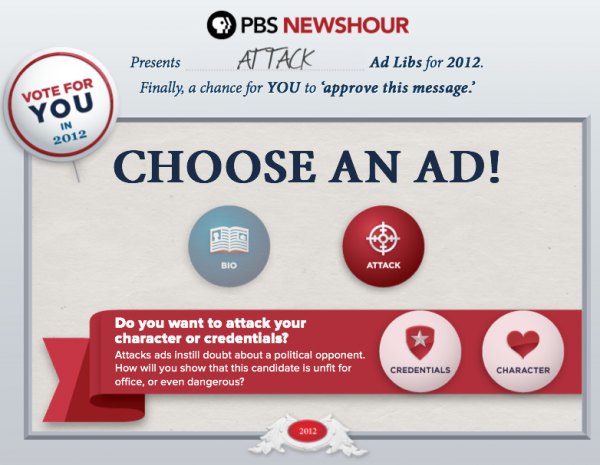 “AdLibs helps you learn how political ads work by making one of your own,” said Mozilla’s Ben Moskowitz, who worked with PBS Newshour to produce the app. “It’s a great example of the power of remix and the web, and of Mozilla’s overall approach to learning and digital literacy.”

Learning web and media skills through making is at the heart of Mozilla’s new Webmaker program, a suite of tools that empower youth and everyday web users to make something amazing on the web — whether it’s their first interactive video, web page or mobile app.

AdLibs was developed by Mozilla and Ocupop using Mozilla’s Popcorn.js as part of a broader partnership between Mozilla and public media. The goal: leverage open web technologies in the 2012 presidential election. Some recent highlights: