Design for America: “Using digital badges to inspire a generation of creative activists” Design for America’s mission: create a generation of creative activists who can use design thinking to tackle social challenges. As winners of the recent “Badges for Learning Competition” hosted by the MacArthur Foundation and Mozilla, they’re using Mozilla’s Open Badges software to create digital badges that:

Learning today happens online and everywhere, not just in the classroom.  Mozilla’s Open Badges helps people get recognition for those skills and achievements, through a shared infrastructure that’s free and open to all.

Next week, the Open Badges infrastructure is launching a new Beta version. What’s new and improved?

This release should be of particular interest to developers. Learn more and get involved:

Check out these cool Mozilla Popcorn demos made at the recent Popcorn Learning Lab in London:

Stephen Johnson explored the potential of using Popcorn at British Telecom. He made a custom Popcorn.js plugin that pulls still  frames from videos to create a beautiful dynamic collage.

Lawrence Job from Young Rewired State paired up with Chris Hutchinson (winner of  the Guardian’s Student Media Awards “Website Of The Year”). Together they created a commenting system that uses websockets to allow multiple people to create comments using Popcorn. This summer, Mozilla is throwing a global “code party.” And of course — you’re invited.

The goal: teach people around the world the basics of coding and webmaking. Through big and small events, open learning tools and resources, and local partners and communities around the world.

We’re working out communications strategy and planning, including a new wiki web site that tries to answer the basics and get people involved.

Read all about it and get involved here.

Join next week’s Mozilla Webmaker call: every Tuesday at 8 am PST

All are welcome. Help build Mozilla Webmaker projects with our global community: 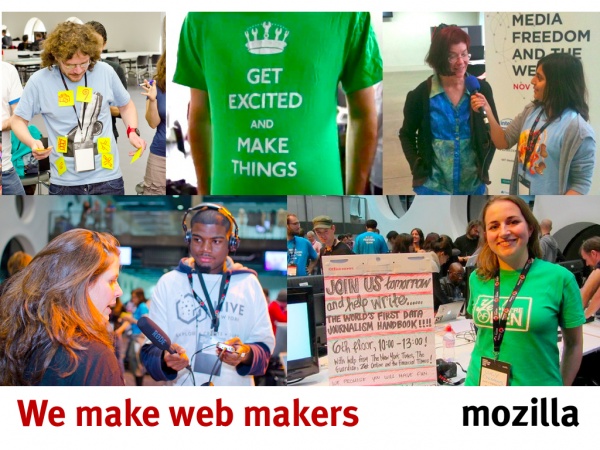